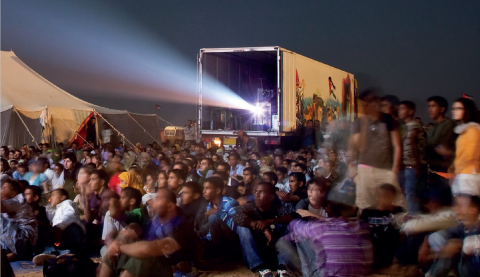 The French translation of the handbook about organising a human rights film festival is now available!

Setting Up a Human Rights Film Festival is an inspiring guide for film festival organisers all over the world, originally published by One World in Czech Republic, and edited by Movies that Matter, One World and FiSahara. Written by festival organisers from around the world, this handbook focuses on the needs and challenges of festivals that are sprouting all over the developing world and those in countries where democratic systems are still emergent or non-existent.

While drawing on some common experiences to all human rights film festivals, the manual does not have a one-size-fits-all approach. Instead, its pages offer a varied tapestry of stories about festivals that face vastly different realities around the world: from rural communities in Sierra Leone and Bolivia to urban settings in Jordan and Malaysia. The book offers first-hand experiences and lessons learned on the many tasks needed for a successful festival including fundraising, overcoming logistical problems, approaching new audiences that are unfamiliar with film, dealing with censorship and security threats.

To provide organisers of existing and emerging human rights film festivals in francophone countries with the necessary know-how, Movies that Matter now published a French translation, which can be downloaded here.

Teaser:
The French translation of the handbook about organising a human rights film festival is now available!
Date:
Tuesday, November 26, 2019 - 06:15