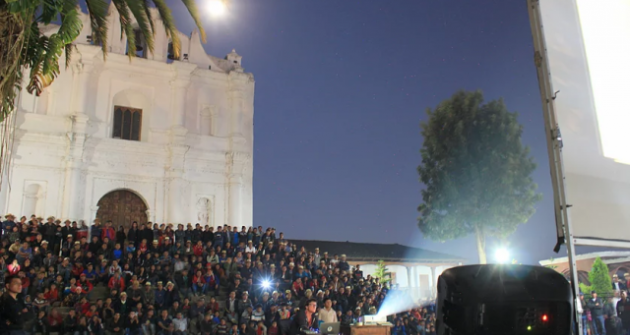 The Muestra de Cine Internacional Memoria Verdad Justicia (International Film Festival of Memory Truth and Justice) was born in 2010 under bomb threats and boycott attempts in a country where human rights have always been of little value, a country which suffered a genocide of indigenous people and which today is considered as a failed state because of the debility of his institutions, its high level of violence and impunity. Private TV channels and commercial theatres have always frustrated education, historical remembrance, consciousness, human rights, dialogue and mutual respect of the 23 nationalities ethnic groups.

The Festival tries to break the silence creating a public space, screening good and independent cinema and provoking dialogue and debates to promote social, economical and cultural justice, solidarity, emancipation, tolerance, creativity, intercultural dialogue, freedom of expression and the respect of all generations of human rights. During the 11 editions the festival reached a total of 80.000 spectators with hundreds of national and international guests. The festival is the only Human Rights Festival in Central America. It takes place in the capital Guatemala-City and is followed by a mobile cinema-tour to different regions. It is  not competitive with free entrance. There is no submission date -we ourself curate the festival - but filmmakers and distributors are invited to propose their films.

The festival's concept is to screen few films which are generally disussed by international and national guests. There is an annual main topic with 4-5 films and several sections like Memory, World Panorama and the youth section Cine 15+ are permanently offered.

One of the most important sections is the Visual Memory Guatemala. Countries from the south of this globe have always been visual object of ambition of filmmakers, anthropologists, ethnologists, war reporters, etc. Important images were taken away and never came back, leaving a vacuum of historical images. The Visual Memory Guatemala tries to decolonialize them. We search and find these films abroad, convince the owners, try to get the distribution rights in Guatemala, translate and subtitle and bring them back. We consider these disappeared, hidden and denied images as a human and collective right.