Spanish Guide on Setting up a Film Festival published 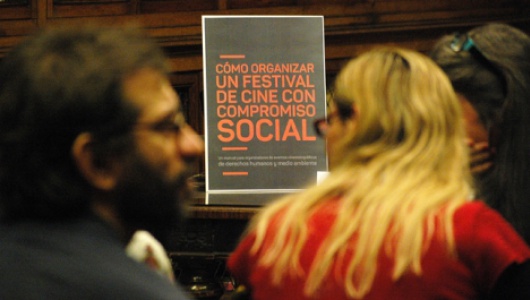 A Spanish handbook for organisers of socially engaged film festivals is now launched. The 276-page guide entitled"Cómo organizar un festival de cine con compromiso social" is full of examples and practical suggestions related to organising environmental and human rights film events. Based on two earlier handbooks in English on setting up a human rights film festival, published by One World in Prague, this Spanish variant was edited and published by the Argentinean multimedia institute DerHumALC. The launch took place at the 3rd International Environmental Film Festival (FINCA) in Buenos Aires. Guest speakers were Mário Branquinho from CineEco (Portugal), Myriam López from the Dominican Republic Environmental Festival, Clara Isasmendi from the International Political Film Festival (Argentina) and Natalia Cortesi, who was in charge of translating and editing the book. Guest speakers discussed the topics in the handbook from the perspectives of each one's experiences in their festivals. The director of the International Deaf Film Festival in Buenos Aires also attended. He expressed his expectation that this guide will become a very useful tool to them and others in the future. Aiming to strengthen human rights related film events in Latin America, Movies that Matter financially supported the publication of this manual.